This Friendship Fair was held with the aim of valuing the relationship between Enzan Monjyuin Temple and the Muslim community which has been connected for 58 years. In the morning session, Muslim cemetery cleaning activity, prayer, and lunch party were conducted. As an evening session, we held a science cafe talk. In this activity, IOT experts were invited to give lectures and have dialogues with students and participants.

At the beginning of the friendship fair, our company president, Mr. Koji Sakura stated the background and purpose of holding this friendship fair, showing gratitude to the Enzan Monjyuin Temple and expectations for the participating students.

We continued to hold free talking sessions for those who wished after the close ceremony and it helps create new connections that transcend the boundaries of universities and affiliations. 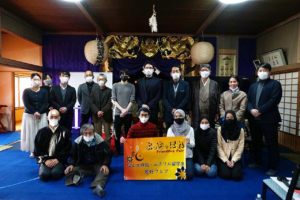